This is the official Uncle Grumpy Inc. © Blog. Most Epic Blog.

There will be very many of the best things on this blog: Art, music, dogs, Trees and many other great things that are your favorite. 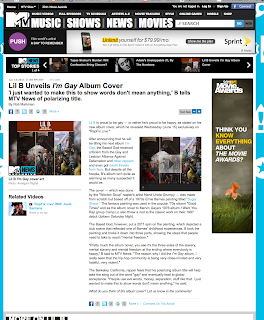 The cover — which was done by the “Wonton Soup” rapper’s artist friend Uncle Grumpy — was made from scratch but based off of a 1970s Ernie Barnes painting titled “Sugar Shack.” The famous painting was used in the popular ’70s sitcom “Good Times” and as the album cover to Marvin Gaye’s 1976 album I Want You. Rap group Camp Lo also threw a nod to the classic work on their 1997 debut Uptown Saturday Night.
The Based God, however, put a 2011 spin on the painting, which depicted a club scene that reflected one of Barnes’ childhood experiences. B took the painting and broke it down into three parts, showing the steps that people need to take to reach “mental freedom.”
“Pretty much the album cover, you see it’s the three sides of the slavery, mental slavery and mental freedom at the ending where everybody is happy,” B said to MTV News. “The reason why I did the I’m Gay album, I really seen that the hip-hop community is being very close-minded and very hateful, very violent.”